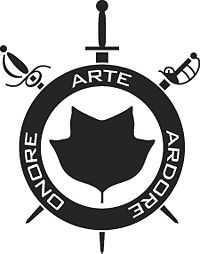 Academie Duello is a school of European Martial Arts based in Vancouver, BC. Duello teaches an Italian system of martial combat that includes unarmed, knife, rapier, sidesword, longsword, and pole weapons. Founded in 2004 by Devon Boorman and Randy Packer and now directed by Devon Boorman, the Academie has grown to be one of the largest schools of Western Martial arts in North America, with over 100 active members.

Academie Duello is located at 412 West Hastings St. (Google Map), between Richards St. and Homer St., in Vancouver, BC, Canada.

Academie Duello is a school that teaches fencing as a martial art, but also honor and Renaissance values as a way of life. The Duello teaching philosophy is summed up in its "Two Tenets":

Devon Boorman has been playing with swords since he was a small child. His formal education in swordplay began with the Society for Creative Anachronism (SCA), an organization devoted to the study and recreation of medieval and renaissance arts. Through the SCA, Devon had the fortune of meeting and training with Braun McAsh, Swordmaster from Highlander: The Series and a long-time practitioner of Western Martial Arts. Over the last ten years Devon has studied with North America's premier scholars of European martial arts, including Tomasso Leoni, Bob Charon, and Bill Willson. Devon also has the distinction of being a member of the Order of the White Scarf, the highest distinction awarded by the SCA for Renaissance swordplay.

A highly accomplished martial artist, Devon has won more than 30 European martial arts competitions, and worked on both stage and screen as a stunt person and choreographer. Devon recently trained actors on the television series Smallville and served as a historical combat consultant for the Discovery Channel.

Devon is an outstanding sword fighting coach and has been internationally recognized for his instruction and competitive ability.

Academie Duello focuses on the study of following weapons:

Academie Duello's curriculum is broken down into 5 levels denoted by a colored cord that is worn on the sword or arm of the student: