Deprecated: assert(): Calling assert() with a string argument is deprecated in /home/customer/www/wmawiki.org/public_html/includes/parser/Preprocessor_DOM.php on line 566

Deprecated: The each() function is deprecated. This message will be suppressed on further calls in /home/customer/www/wmawiki.org/public_html/includes/MagicWord.php on line 876

Deprecated: assert(): Calling assert() with a string argument is deprecated in /home/customer/www/wmawiki.org/public_html/includes/parser/Preprocessor_DOM.php on line 566
 Lunge - WMAwiki

There are several mechanical ways to deliver a lunge:

Mechanics of the Propelled and Combination Lunge

The difference between the propelled and combination lunge is simply the point at which you step with the lead foot. In the propelled lunge you step immediately at the beginning of the rear leg's extension, in a sense jumping forward. With the combination lunge you allow the hips to begin shifting before stepping with the lead leg (see the figure of Agrippa's lunge below).

Why? This ensures that the sword's guard and strong protect you from the point that you initiate your attack to the point that you recover out of measure. It also forces your opponent to deal with the threat of your weapon before considering their own counter-attack.

Why? This ensures that your head is well hidden behind your guard and that your flank is out of your opponent's easy reach.

Never lock your arm joints. Extend them to the fullest point before full extension. This helps prevent injury and causes the muscles to tire less quickly.

Mechanics of the Passing Lunge

The passing lunge is shown in many different forms in historical manuals. The following two example show finishing positions that the passing lunge can take as described and shown by Capo Ferro:

When passing the passing foot lands with the toe in the direction of movement, this is facilitated through the turning of the hips so the left side of the fencer is leading. 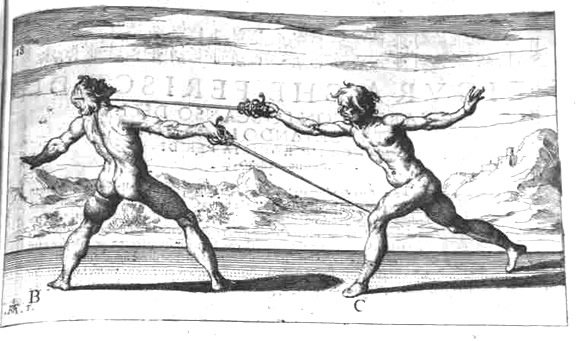 When passing the passing foot continues to point toward the fencer's left. This allows the hips and fencer's body to maintain an orientation where the right side and hence the sword stay in the lead.

This figure from the Gran Simulacro demonstrates the reach that is gained through use of the lunge. Capo Ferro describes this position being reached first by expanding the pace and then shifting the weight of the body (a stepping lunge). [citation needed]

See Gran Simulacro plate 5 for a detailed description of the figure.

This figure from Agrippa's Opera Nova shows in detail the progression of the lunge from arm extension through to the movement of the torso, hips and feet. 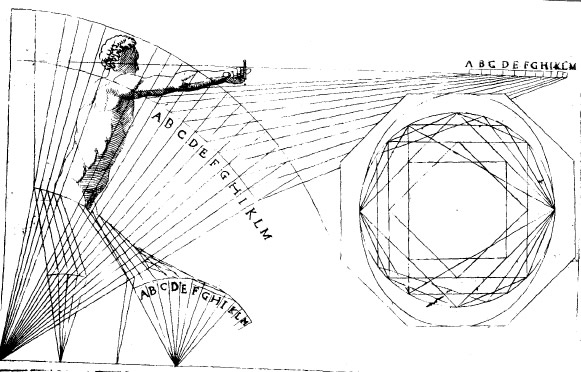 Many practitioners of modern fencing and of Western Martial Arts insist that pushing the knee past the heel of the lead foot is dangerous to the joint and or ligament (this motion is seen for example in the extraordinary pace figure above). The only dangerous part of this type of extension is if the knee does not follow the line of the toe, thus deviating to the right or left and causing strain on the ACL. To avoid this type of strain ensure strengthening of the supporting muscles through exercises such as squats, aerobic lunges, or slow lunging.