Deprecated: assert(): Calling assert() with a string argument is deprecated in /home/customer/www/wmawiki.org/public_html/includes/parser/Preprocessor_DOM.php on line 566

Deprecated: The each() function is deprecated. This message will be suppressed on further calls in /home/customer/www/wmawiki.org/public_html/includes/MagicWord.php on line 876

The Academie Duello Longsword Tournament was an event hosted by Academie Duello in Vancouver, BC on October 25th and 26th, 2008. The tournament featured several key events: a WMA round table discussion between the various attending schools, an accolade tournament, an exhibition of forms, and two workshops.

The following schools and study groups were represented at the tournament:

A round table discussion was held with the intent of sharing and collaborating between the various schools in attendance. More information on this discussion can be found here.

The forms exhibition featured a presentation of Fiore's 12 poste presented by Jennifer Goodwin of Academie Duello and a presentation on disarms from the I.33 Manuscript by Daniel Hill of Lynx Sword School.

An accolade-style tournament was held in the afternoon of the 25th, with 16 combatants. All entrants were entitled to nominate one combatant and to state the accolade they represented, IE technical ability, speed, form-work etc. Four combatants were tied in equal place by nomination; Donald Duncan and Terry Karlssen of New Westminster study group and Luke du Laic of Druzyna Grodu Trzyglowa, London and unanimously elected Walker Lunsford of Academie Duello as their better to recieve the prize. The tournament took one hour and fifteen minutes to complete. 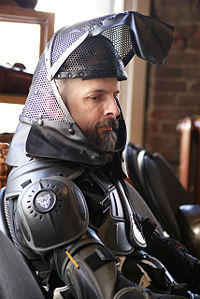 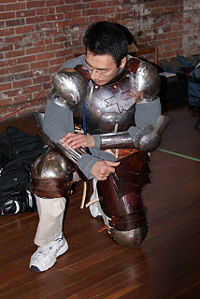 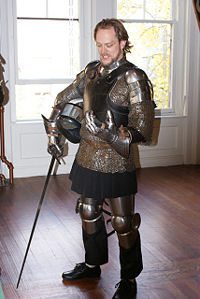 Cleaning up blood from the fighting field during the Longsword tournament.

There were several minor injuries recorded at the tournament. Nearly all were injuries to the combatants hands resulting from improperly covering hand-protection or hand-protection failure. One fencing mask failed after receiving two separate hard hits. No serious injuries were sustained.

Two workshops were held on Sunday, Otctober 26th. The first was a workshop on the Fundamentals of Longsword, the second was on strategy and tactics of the longsword.

External Links for Photos and Videos